“The Work is merely four questions; it’s not even a thing.  It has no motive, no strings.  It’s nothing without your answers.  These four questions will join any program you’ve got and enhance it.  Any religion you have – they’ll enhance it.  If you have no religion, they will bring you joy.  And they’ll burn up anything that isn’t true for you.  They’ll burn through to the reality that has always been waiting.”

A couple of weeks ago I wrote a Forever Family post about doing The Work with Bear.  She was struggling with feeling unwanted as a newborn, so we used Byron Katie’s four questions to help her work through that thought.  Bear went from painful anxiety to quiet peace.  It was an incredible transformation.

I know this sounds like a hippy dippy concept.  Even seeing how inquiry helped Bear, knowing how much it’s helped me recently, I still shake my head in disbelief that it could possibly be this simple.  That taking your thoughts and then asking yourself four simple questions could change your entire outlook.

Well, it sure did for me. 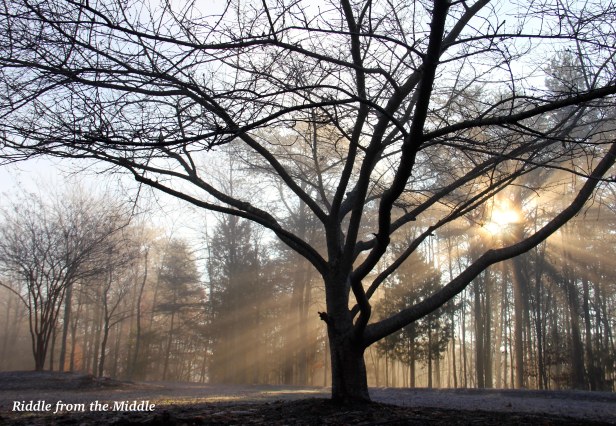 I’ve shared that I’m struggling in my relationship with T-man’s birthmother.  We’ve had several issues that jammed me up over the years, but things really came to a head over the last eight months.  We reached that do-or-die point where things would either get better or a whole lot worse, and seeing as life has enough worse already I figured I’d see what I could do to make things better.

Please don’t misunderstand – I’m not trying to fix this relationship.  Not directly, anyway. There are things that are simply out of my control, but my freaky brain hadn’t accepted that.  I’d latched onto our problems and turned them around and around until they (along with all the accompanying emotions) were firmly lodged in my head.

Do you know what that gets you?  Emotional quicksand.

Miss C had become a quagmire of tangled thoughts and feelings, a maze of hurt and pain I couldn’t escape no matter how hard I tried.  So I decided to Byron Katie it…attack every single thought that wound me up until I’d finally made sense of the situation.  Not to fix the relationship but to fix me – to examine my thinking, really look at it from every angle, and then determine my reality.

The first thing I did was find a notebook.  I figured I had a lot of work ahead of me and would need a lot of space to do it.  (Little did I know that I would fill almost half of that notebook by the time I was done.)

The easiest way for me to grasp inquiry was to read samples of Byron Katie’s work, so I’ll share a little of mine here.  I figure there probably aren’t many people keen to read a 5,000 word post about my brain’s inner workings, though, so I’ll just hit a few highlights to show you how inquiry turned my life around.

My reality is that T-man is not my biological son.  I am not his only mother.  Fighting this reality is what causes me pain.

Being afraid of what might happen robs me of being in the present.  I can’t control others; I can only control my reaction to them.  Stop fighting the idea that Miss C is in our lives and be at peace.

“I need Miss C to respect my relationship as T-man’s mother.”

Keep my mind on my own business; others’ opinions or feelings don’t change my reality.  Be consistent with T-man.  If I nurture our relationship then the rest will work itself out.

These are only a few of the thoughts I put through inquiry.  Each of these caused me great pain and distress when I journaled them.  But after I asked myself the questions, putting each thought under the microscope, I saw how it was the thoughts themselves that were causing me pain.  When I removed the thought, I released myself from the pain.

It’s hard to describe the sense of clarity and calm that came over me after I finished inquiry.  It’s as if the weight from the last eight months has lifted, freeing me from its grasp and leaving me with the most amazing sense of peace.

I’ll be the first to admit this sounds a little…well, unbelievable.  All I can say is try it.  Pick a thought that troubles you, a problem in your life that’s been weighing on your mind.  Then try putting that thought up against the four questions and the turnaround to see what kind of a difference it can make in your life.  I think you’ll be amazed at what you learn.