Bear rolled into being ten last week, and she celebrated over the weekend by inviting a few friends for a sleepover.  And by “a few,” I literally mean a few.  As in four.  One of whom ended up having to go home by 9:00pm anyway.

Yep.  I’m one of those lame moms with a hard limit when it comes to the number of children I can handle at birthday parties.  I’d say it’s a bummer for my kids but they’ve never known any different so I’m pretty sure they won’t end up in therapy over it.  Probably.

At any rate, back in February T-man went to a friend’s sleepover and I tagged along for the ride. Yes, I know that sounds bizarre, but I was keeping my friend company while she hosted twelve boys overnight for her son’s party.  (TWELVE boys.  Twelve.  Yikes.)  Luckily T-man was on board with the idea.  Let’s just say it made for an interesting evening.

Back to this weekend.  Around 9:00 yesterday morning it stuck me how extraordinarily different those two sleepovers were…we’re practically talking night and day.

So here it is, the sleepover rundown, X vs. Y chromosome edition.

I don’t mean to insinuate Bear’s sleepover wasn’t exhausting.  It was.  Being “on” for eighteen hours straight, taking responsibility for other people’s kids overnight, making sure everyone eats and hydrates and plays without significant injury…these things wear me out. But there’s something fundamentally different about a group of girls hanging out overnight, a contrast that was glaringly apparent when I looked back on T-man’s sleepover in February. 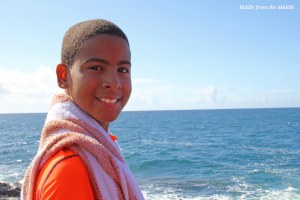 Sleepovers, a kid’s quintessential birthday party.  The details might vary depending on the chromosomes attending, but they all have one thing in common – that feeling the next day of being slightly hung over and two steps behind everyone else.