Sure, they might look different, but they’re all canines.  Four legs, a wagging tail, and lots of barking?  You’re got a dog.  Kind of like how all kindergarteners draw people with a round bubble head, no midsection, and four stick fingers.  People are people are people, right?

Well, as my dogs have clearly shown me, every dog is most certainly not the same.  Ours have each had their own distinct personalities, accompanied by some pretty quirky characteristics.

Gracie is, well, Gracie.  Gigantic, shaggy, adorably goofy, sporting big brown eyes spilling over with love.  Occasionally thinks she’s a 70 pound lap dog.  Playful, energetic, with a giant fluffy tail that sweeps glasses over with a single swipe and a tendency to lose track of how hard she’s biting when we romp. 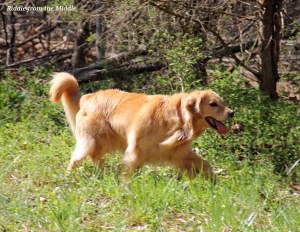 Phoebe’s like a lost child who finally found her way home.  She came to us broken, skittish, anxious about every noise and stranger; after endless love, patience, and training she is absolutely ours.  Sweet, cuddly, with a deep desire for snuggles every single day…Phoebe is positive she’s a lap dog because 45 pounds is nothing compared to her desire to be with you. (And by with you I mean pressed up against your body as if superglued.)

These two were destined to be together.  They adore one another, spending time each day playing, sleeping, and cuddling, and they seem almost distressed when separated.  Phoebe looks sad when Gracie is getting fussed at for one of the million scampish things she does, and Gracie follows Phoebe in and out of the back door like a loyal devotee.  Receiving the gift (ice, a bone, treats in the Kong) is Phoebe’s delight; she happily relinquishes them to Gracie after taking them to the family room.  She also doesn’t hesitate to take back something she wants.  I’ve seen Phoebe literally take an antler from Gracie’s mouth.  (True story.)

On the other hand, our two small dogs were fiercely independent.  Roxie (a miniature dachshund) was possessive, jealous of the attention I gave the kids once they came along, and insisted on doing things her own way.  Ginny (a papillon) was indescribably stubborn, running away over and over again.  More than once we were left with the distinct impression that our repeated insistence on bringing her home was cramping her style.  Determined to be a free spirit, Ginny would simply take off the next time the urge struck. 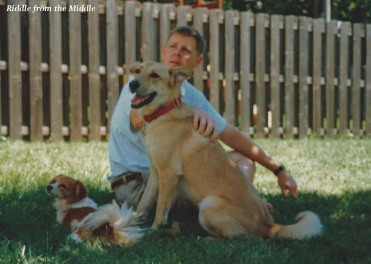 Heidi had the honor of being our very first fur baby.  Man, she was a smart dog.  She was a German Shepherd/Lab mix and her eyes practically sparkled with intelligence.  She had a startlingly deep bark, very German Shepherd-y, but was a big cupcake inside and adored BrightSide fiercely.  Heidi stuck with us through three moves (one cross country) and transitioned into being a family dog with a kind and generous spirit.

Our dogs’ personality differences become glaringly obvious when I look at our combinations. First Heidi alone, then Heidi/Ginny, then Heidi/Roxie, then Roxie.  We had a brief non-dog life again before Gracie arrived on the scene, and now we have our Gracie/Phoebe mix.

Heidi was a terrific dog.  I told BrightSide I wanted a second dog to keep her company while we were at work, though the whole truth might have been that I missed having a lap sized pet.  The irony is that, looking back, Heidi was just fine.  We brought Ginny in and Heidi tolerated her, just as she eventually put up with Roxie and her shenanigans.  But when I see Gracie and Phoebe together now – the way they absolutely adore one another – I realize that any of our first three dogs would have been perfectly content as the only dog in the house.

Yep.  There is no such thing as One Size Fits All when it comes to dogs.  Just like kids, they come in all shapes, sizes, and personalities.

4 thoughts on “just like snowflakes, no two are the same”