It was a stifling day.  Humid…muggy…the kind of day where your shirt sticks to your back when you get out of the car and you wonder why you didn’t think to bring water.

We were excited despite the Sahara-like conditions, though.  It had been years since BrightSide and I visited the D-Day Memorial, and Fourth of July weekend seemed like the perfect time to bring T-man and Bear for the experience.

We bought our tickets at the visitors’ center and watched a short video about D-Day by the History Channel.  I could hear T-man gasp as he listened to the narrator lay out the invasion’s numbers – more than 5,000 ships and 11,000 aircraft supported the landing of 150,000 Allied troops along a 50-mile stretch of beach in Nazi-held Normandy.  The sheer volume of manpower brought to that operation was mind boggling, even to a jaded almost-12-year-old.

We gathered near the gift shop for the next tour.  The heat was oppressive, and eventually BrightSide went to get change for water bottles while we waited.  I stood there fanning myself, absentmindedly watching T-man and Bear play near the machines, as sweat dripped down the back of my neck.  I wondered what on earth had made me think I’d keep a good attitude in that weather but then realized it was exactly as it should be.  Hot.  Uncomfortable.  The sort of July day that made it hard to breathe.  If we were going to witness the memorial for more than 4,000 dead then bearing the heat wasn’t too much to ask.

Our guide Jennifer did a wonderful job of bringing the memorial to life.  As we stood at the entrance sculpture she explained how this area had earned the right to be home for a national monument. Thirty-one young men from Bedford, Virginia were involved in the D-Day invasion.  News traveled by telegram, so their families wouldn’t learn until more than a month later that nineteen men were killed on Omaha beach that day.  One more man was killed at another location.  With a population of only 3,200 that death toll earned Bedford the bitter distinction of suffering the highest per capita one-day loss of any U.S. town.

These “Bedford Boys” were all volunteers, mostly young eighteen- or nineteen-year-olds who had joined the reserves.  Jennifer noted that being in the reserves earned these boys a dollar a day.  While that might not sound like much to T-man and Bear, a dollar a day could buy them a Coke, a movie ticket, and some pocket money.  That these were just boys, after all, boys who lost their lives in a single day of ferocious fighting.

The memorial is remarkable.  There’s a beautiful English garden, representing the role England played in the planning and preparation for the Normandy invasion. 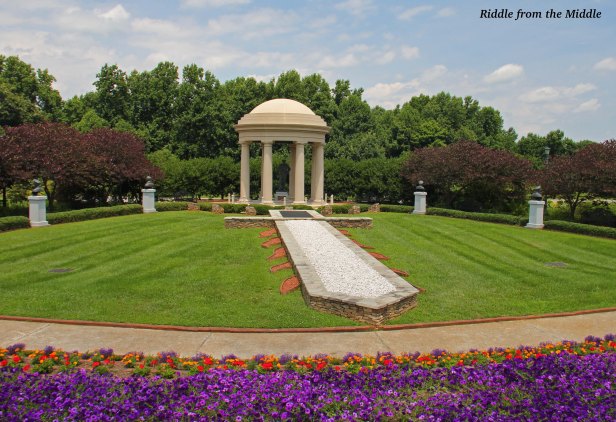 The Gray Plaza symbolizes the Channel crossing and landing.  Its floor is divided into five segments, representing the five D-Day landing beaches (Omaha, Utah, Gold, Juno, and Sword).  The bronze plaques enclosing the plaza bear the names of all 4,413 Allied service members killed in action on D-Day.

The beach tableau is a moving tribute to the Allied soldiers’ fierce struggle waged up and down the landing beaches.  Two “hedgehogs” in the water represent the obstacles Germans put in the tidal flats to obstruct water craft trying to come ashore.  The beach sculptures Through the Surf, Across the Beach, and Scaling the Wall honor the valor, fidelity, and sacrifice demonstrated in Operation Overlord.

The arch rises forty-four-and-a-half feet, an allusion to D-Day’s occurrence on the sixth day of the sixth month of 1944.  OVERLORD is the official name of the military operation we now know as D-Day, and the black and white stripes on the arch represent the black-and-white stripes that identified Allied aircraft during battle.  Flags for each of the Allied countries fly alongside the arch.

One blisteringly hot afternoon we took our kids to bear witness to the strength and courage of men who sacrificed their lives on D-Day.  These are the stories T-man and Bear must hear, lessons they need in order to understand that our freedom comes at a price.

It was a powerful experience indeed.

3 thoughts on “valor, fidelity, and sacrifice”

Join 3,945 other followers
Follow Riddle from the Middle on WordPress.com