Certain things seem timeless.  Almost iconic, really.  Hula Hoops.  Matchbox cars.  Kickball, dodgeball, and flashlight tag.  We’ve enjoyed these for decades (although “enjoyed” might be an exaggeration for some when it comes to dodgeball), and I’m sure they’ll be around for years to come.

But when it comes to conflict?  Well, there are some universal similarities there, too.

Children have argued about “where” throughout all of time.  Who rides shotgun, who gets stuck in the middle for the backseat, who gets the window seat on the plane – all classic arguments that can swiftly elevate into WWIII proportions.  The intellectual argument over sofas: can one actually claim a spot in existence, or do you only lay claim by physically occupying the space?  The monster sized meltdown when one kid dares to change seats at the kitchen counter.  Apparently the “where” is a matter of life and death.

Meanwhile I’m standing there like the last kid picked for flag football.

From little to big, there seem to be endless causes for the gimmes.  The toy in the cereal box, the best prize from the dentist, the latest Wimpy Kid book from the school’s book fair.  Then there’s the big kid gimmes – longings for an X Box, Wii, iPod, iPad, or the latest iPhone.  And that classic “but everybody’s got one”?  Yeah.  Cry me a river.

We joke about adults making power plays, but there’s a lot of power grasping below the age of eighteen, too.  Who gets to hold the remote, who gets the comfy throw pillows, who gets to pick the TV show or movie for the night – all fiercely fought for privileges. Throw in a dog that will cuddle with someone?  Well, now you’re cooking with gas.

We tell Bear she needs to clean her room before going out to play.  Exactly how clean is clean?  Does that include my closet?  Both sides?  Can I do part of it later?  What if I just pick up my floor now and do the rest when I get home?  Isn’t this clean enough?

Plus there’s fall.  October officially marks the opening season of “outerwear negotiations.”  What do you mean, I can’t wear shorts to school?  I don’t WANNA wear jeans. They’re not comfortable!  What do you mean, I have to wear a jacket?!  It’s not that cold out.  It’s going to be 70 degrees in three hours.  My jacket doesn’t even fit anymore.  Well, can I just wear a sweatshirt?  What if I layer a long sleeve shirt under it?  There is no way I’m wearing a hat and gloves!!

T-man and Bear work so hard to wear me down, and I’ve got basically good kids!  It’s gotta be something in the DNA, a universal call-to-battle gene that’s triggered by these situations, but they have no idea what they’re up against.  A woman who refuses to be pushed around by her kids.  Who can wait it out with the best of them while absurd arguments rage on around her. Who won’t kowtow to the under thirteen crowd in a shameless ploy to sway their affections.

A woman who put her own parents through each and every one of these trials.  Except, you know, in the ’70s, so substitute Nancy Drew for Wimpy Kid and Atari for Wii.  But still…I’ve played the game, my friends, and I will not be taken down by tween manipulations. 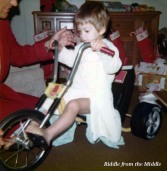