Let’s be clear…I’m a huge fan of sippy cups.  Huge.

Sippy cups allowed my bumbling youngsters to toddle around with their drinks while saving my carpet from endless stains.  It meant they could plop down on their diapered bottoms, tipping over, without me launching off the couch trying to snatch those cups up before they went horizontal.  Sippy cups gave T-man and Bear the independence necessary to explore and play. 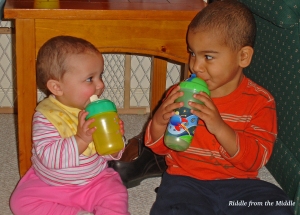 With that being said, I’m seriously confused by parents who don’t recognize when the sippy cup has to go.  I hate a mess as much as the next girl – can you say milk on carpet?  UGH – but there definitely comes a point when the sippy cup is no longer yay.

It becomes a very big nay.

Granted, there’s a benefit to keeping moms everywhere from losing their $#@! over yet another spilled juice on the kitchen floor, but you have to look at the long game.  The reality is that sippy cups were invented for parents, not kids.

Using this type of cup can cause all sorts of long term problems.  Toddlers may develop lisps or other types of speech problems.  Sucking on sippy cups can misshape the oral cavity, causing problems later in life such as airway, sleep quality, or facial form.  Sippy cups also cause tooth decay and cavities.  Consuming drinks containing natural sugars (such as juice or milk) leaves sugars and acids on a child’s teeth that will eventually erode the enamel, and a sippy cup encourages extended periods of drinking.  Plus apparently there are a significant number of injuries in toddlers who fall while holding a pacifier, bottle, or (you guessed it) sippy cup in their mouths.

Now it’s not like any of this is startlingly new information…I heard most of it about ten years ago, when I was dealing with my own toddlers’ hydration, so most parents have heard the same song and dance.  Short term sippy cup use is okay, but don’t get attached.

Based on what I’m seeing around here it looks like we need to define “short term” a bit more narrowly.  One website recommended ditching the sippy cups at ten months, a goal I’ll admit I did not meet.  Generally speaking, though, once your kid hits eighteen to twenty months it’s time to get serious about switching over to cups and straws.

This seemed like common sense, really…so why on earth do I see three-, four-, and five-year olds walking around with sippy cups marketed to their age group?  Heck, I’ve seen kindergarteners still using the things, and all that makes me think is l-a-z-y.

The parents, not the kids.

I’ll admit that I might have a personal issue here.  I was a thumb sucker for many years and ended up with a horrible overbite as a result.  Now, thumb sucking is a difficult childhood problem to solve seeing as a kid’s thumbs are, you know, attached to his body, but a sippy cup? Throw them out and don’t buy any more.  Done and done.

Can I get an amen?

“Thank you for this TED Talk, @michaelharriot. 🙌🏿🙌🏼 It reminds us to frame history ACCURATELY. Enslavement, Jim Crow, mass incarceration and all of the tools of oppression are not Black history, they are white history. We think of those things as Black history because that is how they are inaccurately framed in school, the media, and entertainment. But the history belongs to the people in power—the people who were the oppressors. Your thoughts?” #ShowUp
My Tweets