Last week I took Bear to get her hair trimmed.  I’m not winning any awards in this area – I’ve been known to go an entire year before remembering Bear needs a haircut, and since she isn’t really styling it I just take her to my own hairdresser.  Now, Penny is awesome and does a good cut, but she’s a white gal from Boston who mostly works with senior citizens.  Not exactly a cultural experience for Bear.  Then again, Penny’s scrupulous about getting the haircut right so I guess I could be doing worse. 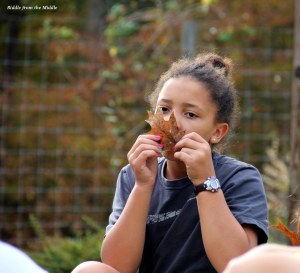 We popped over after school so Bear could lose those dead ends, and while I was working on my Spanish I met a boy we’ll call Red.

Red’s fourteen years old, in the ninth grade, and his mom had dropped him off for a haircut.  He’s super personable, a trait I probably would have appreciated more if I wasn’t a) exhausted and b) fighting the headache from hell.  We talked about his school, hobbies, struggles, and his three sisters.

Red launched into the story of how his mom tricked him into getting in the car.  When I asked why he said, in typical boy fashion, he just doesn’t like getting his hair cut.  He prefers it long.  Now, I’ve seen boys with seriously long hair, and Red didn’t fall into that category.  His hair was just sort of shaggy on top.  The floppy length that’s popular with a lot of boys right now.

By the time he was called back to the stylist’s chair Red and I were thick as thieves.

Meanwhile, mom had shown up with the three sisters in tow.  Two working on homework, one busy distracting them, and everyone bopping all around the salon despite their mom’s admonitions to stay put.  I’d used up my social reserve for the day so I tucked my head into my flashcards and tried to be invisible.

Then Bear began shooting me oddly intense looks.  Those burning eyeballs designed to laser thoughts into my brain, but my spidey sense was off so I wandered over to check in on her.  Things were looking great, and I could tell she liked where her cut was headed – that’s when I heard the stylist behind me call Red’s mom over to check him.

I’ll hit the pause button for a moment here.  Just a reminder: Red is fourteen.  He’s in ninth grade.  His mother lied about their destination, but he sat in the chair anyway and got his hair trimmed up.  And now the stylist wanted mommy’s approval?

Following universal mom code, I tried to mind my own business while wondering what the hell that woman was thinking.  It’s my personal philosophy that hair is not one of the battles I choose to fight – we’ve got much bigger fish to fry around here – and I get not everyone feels this way.  But dictating hair at fourteen?  Are you freaking kidding me?!

I held the briefest moment of hope that maybe, just maybe, she’d tell him he looked great and off they’d go.  Well, mom pissed on that hope pretty quickly as she told the hairdresser to keep cutting.

Which is how I ended up staring wide eyed at my daughter as this boy – the one who’d spoken with me so confidently for half an hour – morphed in the stylist’s chair.  He was sobbing and arguing as the stylist ignored the brouhaha and finished the cut.  Mom was paying, so that was that, and what started as a “well, okay, if I have to” turned into tears, frustration, and an angry teen storming out the door.

I’d like to think the mom had some logical reason for demanding Red’s hair be cut to her preference, but I couldn’t glean one from their back and forth.  And, just like I don’t want other people to butt into what my kid’s hair looks like, I’m sure a bunch of you are thinking it’s none of my business.

But here’s what I can’t help wondering.  Kids – even teens, with their privileges and responsibilities – have little real control in their lives.  Laws control them, schools dictate to them, parents have rules at home…In a million ways, teens are told what to do and where to go every day.

Is it really so unreasonable for them to want to choose their own hairstyle?

8 thoughts on “gunfight at the O.K. Corral (aka mamas, sons, and the battle cry)”

Join 3,952 other followers
Follow Riddle from the Middle on WordPress.com