I am.  As sure as the sun rises in the east and warm cookies are like crack, I most certainly am smarter than a middle schooler.

Now if we’re talking prodigy then no, my IQ points won’t come out on top, but as for your average, run of the mill, hormone driven middle school student?  Yeah.  I got it covered.

So why are my kids convinced they can pull the wool over my eyes with, frankly, the lamest stories ever? 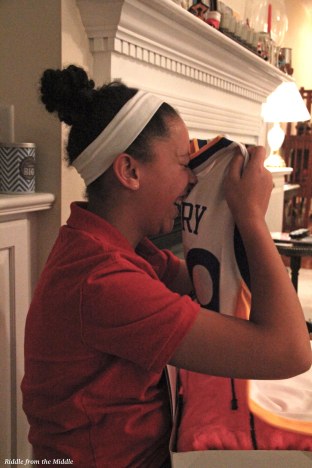 We’ll put aside the fact that wool makes me itchy as hell and focus on the crux of the matter: either my kids are convinced they’re geniuses, or they’ve come to the conclusion that I’m dumb as dirt.  Or, if not dumb as dirt, then a bambi-like naive making me susceptible to any old story they put out there.  It’s crazy how many of these middle school kids think their parents are the same way.

10.  I can’t concentrate, I can’t do my homework, my head hurts and I’m dizzy…can I go outside to  get some fresh air?

8.  I did brush my teeth.  My breath smells from breakfast.

7.  We should have a family movie night.  That would really be good family time together.  We haven’t had one in a while… Hey, can I invite A to come?

6.  I’m too tired to walk the dog.  Yesterday really wore me out.  I’ll probably just hang out inside today… Can I go shoot baskets with my friends?

5.  I ate some peas.  I finished them before you got to the table.

4.  But I did return your fleece jacket.  I don’t know why it isn’t in your closet – maybe you wore it somewhere?

3.  Can C stay here while you go to your meeting?  I promise we won’t do anything wrong.  We’ll just keep playing our game.  Can you show that trust in me?

1.  I don’t know where the rash came from.  [two days later]  It’s getting worse.  No, I don’t know where I got it.  [one day later]  Well, last week we checked out the construction site and after I found fiberglass on my pants.  [five hours later]  We were playing hide and seek.  Over the garage.  [twenty minutes later]  I hid in a box.

12 thoughts on “are you smarter than a middle schooler?”