Let’s see what you’ve been up to lately. 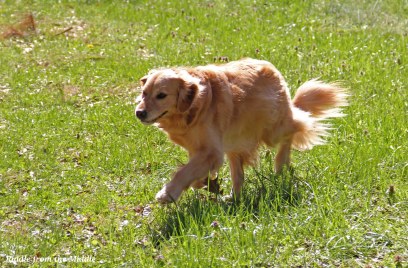 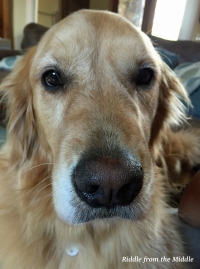 **  One slobbery tupperware of Stevia packets. Because I’d actually remembered to hide all the breakfast food while I switched laundry loads.

**  A dinosaur stamp. You know the kind – that small wooden stamp you press into an ink pad to make lots of dinosaur marks. Why Gracie would eat this, I don’t know. An even better question might be why I have a dinosaur stamp and where I’ve been keeping it.

**  Two socks, both missing their mate.

**  One pint of blackberries stolen off the counter. Organic blackberries. That sh*t is expensive.

**  Half a box of Cheez Its, gobbled hastily. Plus part of the plastic bag. And a section of the box itself to boot.

**  My Post It note listing the day’s tasks. Gracie had to plant her paws and nose her way past a pot holder to peel this tiny yellow note off the countertop. I mean, what the hell?!

**  An allen wrench. Taken from BrightSide. While he was assembling a freaking stool.

**  BrightSide’s reading glasses. I heard a clatter from behind the armchair then out comes Gracie, plodding along with those glasses dangling from her mouth like she knew the sort of trouble she’d get in for eating them.

**  My damn snack. I’ll admit it – I filled a baggie with almonds and Craisins then committed the cardinal sin of leaving it on the counter. Shoot, next time I’ll just bring my food with me to pee. I came back and there she was, crouched under a kitchen chair, chomping down on my Ziploc bag. Gracie made me chase her under and around the damn table just so I could pry a drool filled baggie from her mouth. Seriously, it was frothy and dripping. Ewww.

**  I just about fell out when I came in the other day to find Gracie, our beloved golden retriever who doesn’t, you know, retrieve, holding the tennis ball from her toy box. The tennis ball. Her jaw dropped open and the bright yellow ball bounced toward me as she stood there, tail wagging joyfully. It’s the most dog-like thing she’s done in a while. 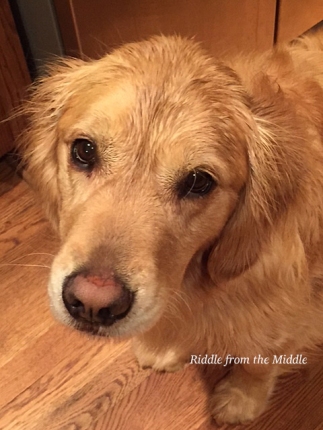