Y’all, Gracie got herself in a real pickle.

Sure, she’s eaten things that made her puke. She’s devoured stuff that boggles the mind and makes us wonder how she’s still here. I mean, a Brillo pad? How is that even possible??

But a month ago Gracie used up about nineteen of her nine lives when that dang dog ate a Ziploc bag of Advil.

”Why on earth would you have a Ziploc bag of Advil lying around, Laura?” That’s a valid question. We’d recently returned from a trip and it was part of my emergency the-plane-is-killing-me stash. Necessary? Yes. Smart container? No. Not in hindsight.

Gracie went into stealth mode while I was out of the house for a whole twenty-two minutes. She crept into the office, found my partially unzipped backpack on the floor, and snuffled her way inside to look for goodies. In this case goodies meant a plastic baggie holding chewable Pepto Bismol and two snack bags, one with Tylenol and another with Advil.

She gobbled up a few Pepto tablets. Tylenol wasn’t to her taste so she spit it back out. But Advil? That was candy coated deliciousness. Gracie basically ate the entire bag, coating her paws an incriminating shade of pink in the process.

Any amount of ibuprofen is toxic for dogs. I’m certain the amount our furball ate would have killed a smaller dog, but even one Gracie’s size (regardless of her gastrointestinal history) cannot process ibuprofen. If your dog ingests this drug in any amount, take them to the vet as soon as possible. Early treatment can literally be the difference between life and death.

It didn’t take long for Gracie to start puking pink. A big splotch in the family room, another splotch in her crate. I thought throwing up was a good sign, that she was getting the drug out of her system and we could ride this out at home. (I was wrong.)

I also thought it was a good sign when she ate dinner. Diminished appetite is a symptom of toxicity and in Gracie would surely mean the end times, so seeing her gobble up food made me happy. But when she puked it back up? That’s when I really started to worry. Nothing interferes with this dog’s mealtime. Nothing.

But because I’m too stubborn for words I decided to doctor my doggy. By 11pm I realized my mistake. Good advice from a friend and some terrifying internet research had me up all night with Gracie and on the road to the vet by seven the next morning.  It turned into the longest morning of my life.

(Okay, hyperbole. But it was painful and terrifying and if this blog post can help even one person avoid it then it’s worth it.)

Our vet ran labs to measure Gracie’s kidney function and they came back elevated. The ibuprofen had damaged her kidneys. Treatment for ibuprofen toxicity typically involves administering an activated charcoal solution to prevent any further absorption of the drug then an extended period of IV fluids to flush the kidneys. And then you wait. You wait to find out the extent of the damage so you can figure out what comes next.

Our vet could have handled this but they keep business hours (and close early on Wednesdays to boot). BrightSide and I had a decision to make: trust that Gracie wouldn’t dislodge her IV overnight or take her to an animal hospital in Greensboro with 24 hour care. Given Gracie’s tendency toward misbehavior – ahem – we decided round the clock supervision might be best.

As has so often been the case, Gracie was extremely lucky. After 24 hours her kidney function had returned to normal levels. After 72 hours of treatment our fur baby came home (with a UTI because of-course-she-did) on the most ridiculous medication regimen you’ve ever seen, but she came home. Thank goodness.

She doesn’t get a pass, though. Experiencing ibuprofen toxicity puts Gracie at greater risk for kidney disease as she gets older, and she’ll need blood panels run annually once she clears another checkup in July.

You guys, this stuff is no joke. Tell your family, tell your friends.

And seriously, pray for us. This dog… 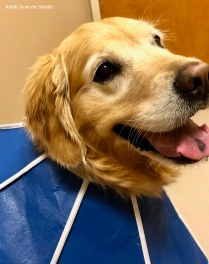 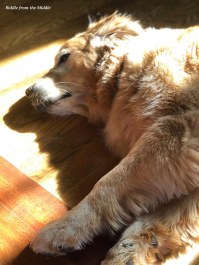 Join 3,952 other subscribers
Follow Riddle from the Middle on WordPress.com