The only – and I do mean only – good thing to come of Gracie’s pharmaceutical shenanigans is that she was relatively sedate for a while. Not sick, just…quieter than usual. The kids worried that she’d never be the same again.

Someone hold my drink. [SNORT] 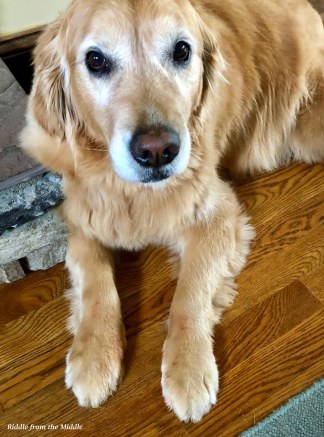 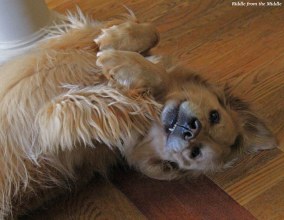 Gracie (“you know you love me anyway”)

Here’s our furry friend’s running tally since her last update:

**  Paper towel(s). I can’t even pretend this one is singular. This dog – if she spots a napkin or paper towel in the kitchen she.will.lunge. Apparently it’s a biological imperative.

**  A guava. Did you know this is a thing you can actually hold in your hand? My dad’s all about the guava – guava juice, guava jam, I don’t even know what else – and my child brain processed this as “oh, it’s something they put into stuff, like a flavor.” But NO, it’s a FRUIT, one you can bring home from the store to try. I guess Gracie felt like she deserved to try one, too. But I have to admit, watching her delicately hold the egg sized fruit as drool dribbled from the corner of her mouth was hilarious.

**  Corn chips. My real life folks know my house has become a No-Fun zone. The kids warn their friends that yeah, we can get a snack but we don’t have anything good. Bwahahaha! This means junk food purchases are precious treats. This also means Gracie takes her life in her paws when she devours ¾ of the bag while we’re tucking kids in. DOG!

**  Bear’s lunch. Okay, to be fair she did leave her lunch box sitting at the foot of her stairs – duh. Gracie scored a bag of Werther’s, goldfish, and a pack of gum from that little adventure.

**  A roll of toilet paper. Fine, technically she didn’t eat the entire roll, but once a dog’s crushed and drooled on that TP…well, at a certain point there’s just no saving it.

**  Ziploc with hand wipes and chewable Pepto Bismol. Thank goodness I heard the crunchy crinkling and came to investigate. I mean DAMN, dog, have you learned nothing this month??

**  Ziploc with a peanut butter KIND bar. I’ve always been a fan, but I’m starting to wonder if we need to phase Ziploc bags out of the house altogether.

**  Koozie. Y’all know what I mean, right? That squishy thing you put around your soda can? Yeah. So count this as one gnawed and soggy, one squirreled away in her crate for a midnight snack.

**  A crazy bright aqua washcloth. I have no idea where it came from, it doesn’t match any of our towels. Hell, maybe Gracie’s found a way to teleport other people’s belongings in for her entertainment. Let me know if you’re missing one.

**  A slobbery pair of socks. My socks. MY SOCKS THAT I JUST WASHED. I mean, come on!

**  A section of Honeycrisp apple. Listen. I’ve got a lot of patience with this dog, I really do. She is who she is and nothing is gonna change that. I swear I’ve left plates of cut up apple in front of her while throwing away the core and she’s good as gold, relatively speaking, but apparently all bets are off when I’ve bowed to the apple industry gods and paid an outrageous price for a Honeycrisp. So the day Gracie plopped her big fat paws up on the counter right in front of me and snatched a Honeycrisp section off my plate was the day she spent my lunch break staring mournfully in through the back door because dammit, dog – some things are sacred. 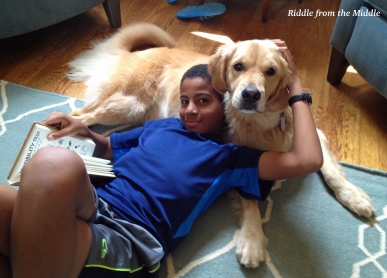 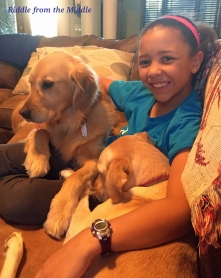 6 thoughts on “koozies and that sacred Honeycrisp”