I’m on a cascading post thing here. First was Rachel Cargle on Wednesday’s gratitude post, then came yesterday’s look at data on race and ethnicity in our local school system. Today, as promised, I’d like to dig into what we can learn from all those numbers.

Let’s start with access to gifted and talented resources. 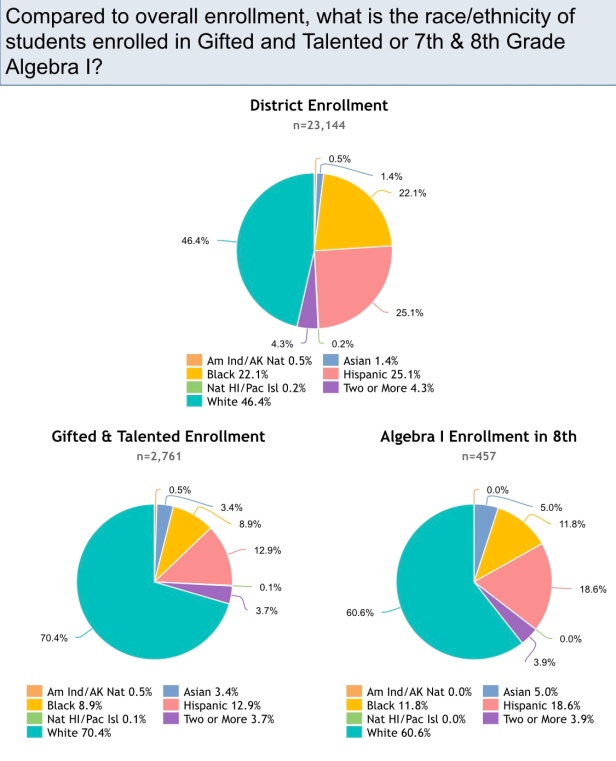 A friend brought socioeconomic status into the mix yesterday, and he’s absolutely right. These issues are intersectional – a financially secure Black child will sidestep certain obstacles a poor Black child faces, but there’s a unacknowledged baseline issue in our country. If you put two children with the same economic status side by side, one White and one Black, they are not treated the same. Not because a teacher looks at the Black child with hatred in his/her heart but because we live and breathe a White dominant culture every day and that has side effects.

But that’s a post for another day. Let’s talk proportionality.

1,944 gifted White students is 18% of the total White population. 246 gifted Black kids is less than 5% of the total Black population. Crunch the numbers and that means White kids were 360% more likely to be identified as gifted.

Even accounting for a racial disparity in poverty, I think we can agree that 360% is an absurdly biased spread.

And we haven’t even begun to explore the domino effect. Early access to accelerated classes leads to extracurricular educational opportunities leads to an advanced track in middle school, more A.P. classes in high school, and a wider selection for higher education which leads to better career opportunities…and the beat goes on.

Yes, it can all start with an elementary school gifted program. 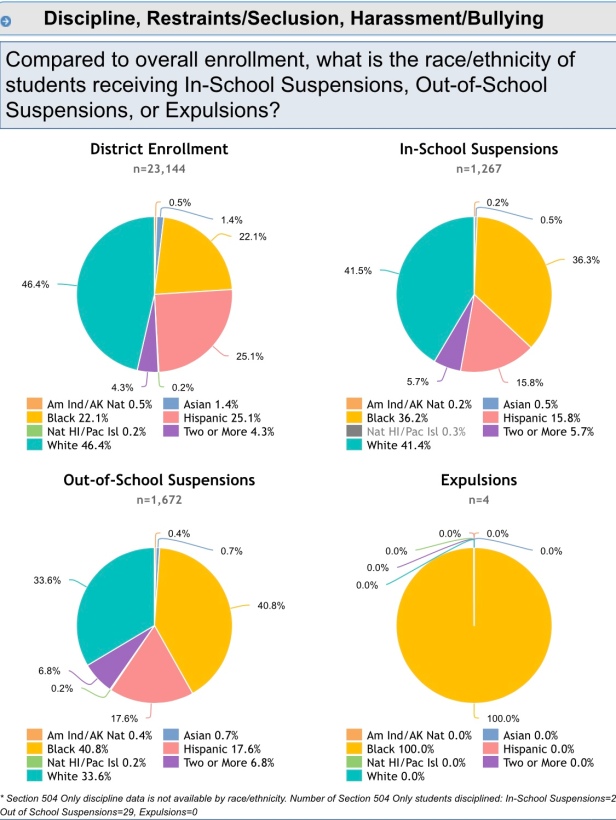 The visual from these pie charts was the first thing that hit home.

“But what are they supposed to do, Laura, not punish the kids because they’re Black?”

How do you suppose it gets to the point where an ethnic group makes up only 22.1% of the population but 36.3% of ISS and 40.8% of OSS? Do you think it’s because that many more Black students are breaking the rules? It turns out not only were Black kids 360% less likely to be identified as gifted, they were also 260% more likely to be suspended out-of-school. Some people see that and say yeah, they’re not gifted, they’re less inclined to succeed in school, so why wouldn’t Black kids be disciplined at higher rates?

Here’s what I see. I see a system that doesn’t understand how White brains in America are biased against people of color.

There’s a reason that yellow piece of the pie keeps growing larger, and it’s not because Black children misbehave more. It’s because our prejudice teaches us to judge Black students more harshly, label them more quickly, and punish them more severely.

We are the problem here.

8 thoughts on “I see a system that doesn’t understand how White brains in America are biased against people of color.”

Join 3,959 other followers
Follow Riddle from the Middle on WordPress.com