Back in March of 2015 I introduced our two fur babies to the world at large. It was probably more like the three people who read that post, but you get the gist. Gracie and Phoebe hit the scene, tails wagging and antics on display.

Well, our crew has grown by one.

No, not a baby. Not a human baby, anyway. Sheesh. 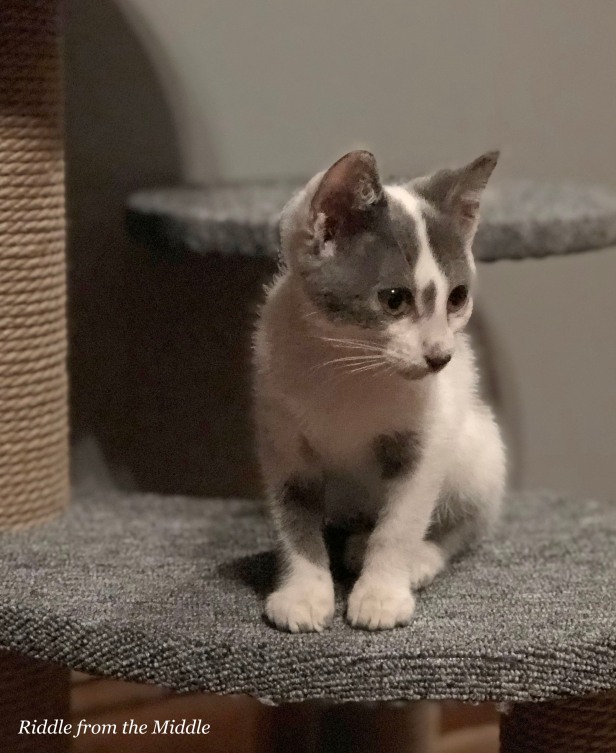 Meet Mia. She’s nine weeks old, just under two pounds, and man, has she got a story to tell. It makes me want to pitch Survivor, Feline Edition.

My friend gem was on her way back from an appointment when she saw a kitten in the road who couldn’t get her footing. She kept getting rolled by wind coming off the passing cars. Several good samaritans stopped to help — one thought he saw the kitten run under gem’s car but no one could find her, and searching the nearby bushes and cemetery didn’t turn her up either. Once they confirmed the kitten wasn’t under her hood everybody figured she had run off.

Gem went to her office, home for lunch, then back to work for the rest of the day. She didn’t get home until late and had no idea anything was up until she let her dog out. He barked and zeroed in on the car, and that’s when gem heard a meow. Y’all. It was the beginning of September in North Carolina. Which means it was freaking hot. That kitty hitched a ride under gem’s car then hid out for NINE LONG HOURS. The fact that she didn’t die from heat or crawl back out onto the busy road is nothing short of a miracle.

The rescue group didn’t have any foster openings. None of the three volunteers who help with kittens were available either. They decided the kitten would have to go to a shelter the next day so they could find a foster for her, which meant a late night pet store run for gem. She was standing in the checkout line talking to her friend – there’s no way I can keep a cat may have been involved – when the guy in front of her pulled a Superman. He said to call his wife in thirty minutes, he was going home to talk to her about fostering the cat.

Kitty found a home for the night, and soon after that the thought of her began wiggling its way into my heart.

I sat with it for awhile. We can’t have a cat. These dogs are full on crazy as it is. The kids are all over the place. I’M ALLERGIC, for pete’s sake. All solid reasons to go on my merry way.

So what did I do? I decided to meet the cat. Secretly, of course, because if she made me all snuffly and sneezy there was no way I could look my kids in the eye and say my bad, mama can’t have a cat after all. Which led to a delightful half hour at the foster home, talking with the mom while snuggling Mia up under my nose. Imagine my delight when I didn’t burst into flames.

That’s right, the rescue group had named her MIA in honor of her – ahem – adventures.

The next hurdle was the dogs. The foster mom brought Mia to meet our fur babies to make sure things didn’t get explosive. It was…interesting. But that’s a post for another day.

I guess she was meant to be.

19 thoughts on “our cast of characters grows by one”