Well, dang if THAT isn’t the truth.

Everyone’s entitled to their opinion – and Lord knows we’ve all got one – it’s what happens next that I sometimes take issue with.

Think you could have run a better book fair/class party/neighborhood potluck/grassroots revolution? Awesome. Were you on the committee? Did you help with planning, setting up, or running said event? Are you offering to host next year so you can try out your nifty improvements? No? Then shut your pie hole.

Constructive criticism is just that. Constructive. If you’re running your mouth about anything from “they really should have set up that table over there” to “we could have overthrown the dictator by now if we’d just boycotted liquor” but aren’t actually doing something to help the situation then you’re being critical. And sometimes an a**hole to boot.

Side note: Hey there, people trained to scan the internet for mentions of “overthrow” or “revolution” – just kidding. Especially about that boycotting the liquor part. No way that would make the top ten list of ways to spark the movement. Guys, I’ve got it! Let’s tell everyone to put down their beer. THAT’LL teach them. Um…no.

I don’t mind critical thinking. I think we’d be a lot better off if more people practiced it, actually…but that’s the “impartially evaluate the situation and weigh the pros and cons” critical thinking I’m talking about, not the “geez, that new coffee place really sucks, why can’t they offer biscotti?” one.

The devil’s in the details, am I right? 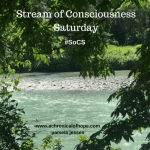 8 thoughts on “SoCS – dang if THAT isn’t the truth”