Share Your World Meets Harry Potter and the Chamber of Secrets:

Harry Potter can speak to snakes. If you were able to have conversations with any one animal, what animal would you like to speak to? What would be the topic of your first conversation?

I’d choose one of the squirrels in our backyard, and the first thing I’d ask is what it feels like to have this sixty-five pound fur ball barrel out the back door in his direction. 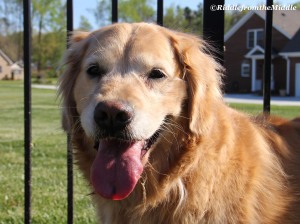 The portraits in Hogwart’s dormitories can talk. If your graduation portrait could speak to people passing it by, what would it tell them?

“Ah, so you think this is the big time, huh? That these are the best (or worst) days of your life? You have no idea what’s ahead for you; high school is just the beginning. So whether you’re a sports superstar or a drama geek, student council prez or feel invisible every day – hang in there. Enjoy high school, sure, just know that there’s so much more waiting for you out there.”

Harry Potter, Ron Weasley, and Hermione Granger use the Pollyjuice Potion for finding new clues for the happenings at Hogwarts. (The Pollyjuice Potion is a magic potion that allows your body to form into that of another and live their life for a few hours.) If you could transform into another being, who would you chose to be? What would you hope to learn?

I’d choose Bear. I think spending a few hours as a teenage girl today could give me valuable insight into things happening in her life. I’m not gonna lie – we’ve had several WTF moments over the last week and I’m hardcore struggling with what some of these kids are doing. Maybe walking a mile in her shoes is what it takes to make sense of it all.

There was a flooding in the girl’s bathroom where Moaning Myrtle resides. What has been the most dangerous (or comical) ‘flooding’ where you reside?

It wasn’t funny then but I suppose we can giggle in retrospect…that would be the time I was standing at my kitchen sink, momentarily frozen in confusion at the water pouring over my feet. I glanced at the dishes I was washing, convinced I’d shot water over the edge of the counter again, but nope. Once I looked down I saw water running out of the cupboard, and when I opened the doors I stared in confusion at water streaming from the garbage disposal. Plus of course it happened on a Friday because that’s just the way plumbing emergencies go.

And now our traditional questions:

(Serious one which is rather creepy): How do you think you’ll die? IF you do think about it?

I can’t say I’ve given this much thought. Let’s put it like this: I’m lucky I never drove myself off the road when I was too sleep deprived to be driving or dropped dead from too many cheeseburgers and fries.

I’m a fan of The Hoarse Whisperer and The Volatile Mermaid (aka @OhNoSheTwitnt).

What’s invisible that you wish people could see?

Air and the particles moving through it. I think we’d all be a lot more aware of how close we stand to others if we could literally see the germs passing between us.

If over time you replace parts on a car, at what point does it stop being the same car you bought? How many parts do you need to replace to make it a new car?

Have I mentioned I’m not good at cars? And that by “not good” I mean I sound ridiculously unintelligent when I try to speak on them? Okay then…I’ll say twenty-three. After twenty-three different parts then you can call it new again.

Roger and Melanie are co-hosting Share Your World for the next few weeks. Click over and check out their blogs.

Join 3,952 other followers
Follow Riddle from the Middle on WordPress.com