2.  We’re waiting on the results of a biopsy for our Gracie girl.

3.  Just because, here’s some pics of her big dopey face.

5.  Gracie isn’t having a good time. Cue me calling the vet fifteen minutes after getting back to the house.

6.  Okay, so I know you said I can’t give her pain medication until tomorrow but she’s actually whimpering and that’s a sound this dog never makes so what gives.

8.  ps – Apparently whimpering is common when they’re working off anesthesia. Who knew.

9.  This whole wait-a-week-for-the-results thing blows, though.

10.  Okay, shake it off, distraction would do me good.

11.  Our quesadilla night was a big hit. This page has a How To Make A Quesadilla primer for those new to the game and they’ve got great filling suggestions in the notes.

12.  We made some with chopped chicken/peppers/pepperjack cheese and chicken/roasted green chile/cheddar and monterey jack cheese. I think I even tossed some green onion into a few. So yummy.

13.  These Black Bean & Corn Quesadillas were a surprise. I skipped making vegan nacho cheese, opting instead for cheese on hand, but otherwise I followed the recipe.

14.  Turns out those vegetarian quesadillas were Bear’s favorite. Mine too.

15.  I’d already mixed up a batch of salsa but there was one more dipping option I wanted: Avocado Sauce.

16.  I spotted the recipe when I was scouting quesadillas and it sounded delightful. Another avocado option besides guacamole? Yes please.

17.  Was there a good chance I’d be the only one eating it? Yes. Was I unhappy about that? Nope, not at all.

18.  In the end it turned out I was the only one who ate it and I wasn’t the least bit sorry. Four days later and I’d devoured every last bit.

19.  I must be on a Mexican food kick because quesadillas are back on the menu this weekend.

20.  I’m excited to add a Buffalo Chicken Quesadilla to the mix. I’ll let you know how it goes.

21.  The kids are wrapping up their first official week of summer, can I get a woo hoo?

22.  No morning alarms, no project deadlines, no online classes.

23.  Then again it means these kids are here twenty-four freaking hours a day and sometimes mama just needs a little breathing room.

24.  Try saying that on Instagram and see how fast the #MotherhoodIsABlessing crew throws down.

25.  Because motherhood can be hard, you’re just not allowed to say it.

26.  What else, what else…did I mention Seven tried to brawl with the dogs?

27.  We have a pretty standard morning routine. Get up, give Phoebe her medicine, let the dogs out for a post-breakfast pee.

28.  When they come back in the basement the dogs almost always hold a rowdy play session. More than a few times I’ve caught Seven staring at them in fascination only to blitz attack Mia later on. 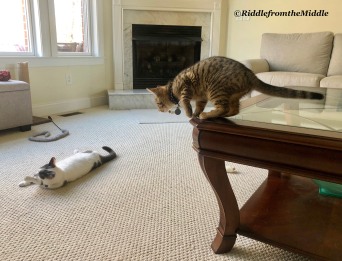 29.  Last week Phoebe and Gracie were being particularly…let’s say spirited. There’s a thin line between good fun and leaving a mark and they’d pranced right up to it.

30.  I was literally opening my mouth to call Settle down! when out of nowhere a ball of fur flew through the air.

31.  It took a full second to register it was Seven jumping over the dogs’ backs and into the fray.

32.  His tail was puffed out like a raccoon’s and he hissed like a snake, upping the ante on their play growls.

33.  He bounced in and out of the grouping twice before banging off Phoebe’s back. Phoebe accepted the challenge and turned with a WOOF, sending Seven bouncing back out.

34.  He bounced in again, landing on Gracie’s back, and it was the sight of her seventy-five pound frame turning toward his less than ten pound body that finally jolted me into action.

35.  I leapt from my chair with a WHOA WHOA WHOA SETTLE DOWN EVERYONE.

36.  Seven didn’t need the prompt; as soon as he saw Gracie turn toward him he took off like a shot for the stairs. Guess he realized he’d bit off more than he could chew.

37.  I brought the dogs upstairs to get water and found Seven crouched on high ground, tail still puffed out, keeping a wary eye on the dogs whenever they moved. It took him the rest of the morning to stop jumping every time one of them passed by.

38.  Seven is 100% convinced he’s a Big Boy in a small frame which is probably why the next day I caught him popping Gracie in the face.

39.  He’d go pop pop then skitter sideways with a wanna play? look. Gracie just looked at me perplexed, wondering how to handle this little bundle of energy.

9 thoughts on “40 things for Friday #58 (Dopey dogs, quesadillas, and the kitten who would not quit.)”

Join 3,959 other followers
Follow Riddle from the Middle on WordPress.com