1.  Welcome to July, where you can sweat off three pounds walking to the mailbox. Good times.

2.  I hear storms are moving through tonight, though.

3.  That’s bad news for Phoebe. She’s not a huge fan of thunder or lightning.

4.  The good news is tomorrow’s high is supposed to be in the seventies so whoop! whoop!

7.  Just kidding — that dog rolls with anything, hot/cold/whatever. 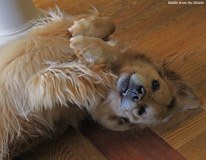 9.  You’ve probably noticed by now that I share a lot of stuff iowa girl eats. I’m a fan.

10.  She uses ingredients you can find at your local grocery store, plus her step by step instructions (with photos. gotta appreciate the photos.) really help if you’re experimenting with something new.

11.  Anyway, we were about to talk fajitas. My daughter orders them all the time from a local Mexican restaurant and absolutely swooned over the homemade version.

13.  Tips from my first go ’round: Cut veggies into roughly the same size. I found myself pulling onions and mushrooms out early because they sautéed faster than the bell peppers.

15.  And make sure the chicken is well seasoned.

16.  So that was our highly successful fajitas night — happy tummies, two thumbs up! — but later in the week it was just BrightSide and me. That gave me a chance to make one of his favorite dinners.

17.  Because I was feeling spunky I tried out a new version: The Pioneer Woman’s Lemon-Garlic Shrimp and Grits.

19.  Because Divas Can Cook schooled me I adapted the grits. I used half and half for half of the water to make them a bit creamier.

20.  Yikes, that’s a convoluted description, let me try again. Instead of 2 cups water I used 1 cup water and 1 cup half and half.

22.  The cheeses mixed into the grits were interesting. Pepper jack was a neat twist and I’d never even heard of mascarpone cheese.

23.  I was mixing it into the pot thinking okay, Ree, I’m going on faith here. It turned out fan-tas-tic.

24.  I got another “restaurant quality” compliment from BrightSide; you know that always makes me smile.

25.  This was apparently the week for unpleasant kitchen surprises, though.

26.  First there was the something-icky-dripping-from-above moment. Didn’t enjoy that one.

27.  Then there was the moment I realized our oven died.

28.  Apparently the universe decided to turn the kitchen into our own personal Bermuda Triangle.  Except instead of disappearing sh*t just randomly breaks.

29.  Anyone wanna place bets on what flames out next?

30.  I took one kiddo by the DMV this week to get his level three license.

31.  In NC they step you into teen driving. Level one is a learner’s permit.

33.  T has a level three so now he can drive anytime with multiple passengers. Am I wigging out? No, I’m not wigging out.

35.  It’s that whole gotta let them grow up thing. Who decided this was a good idea? And that it would work out fine when they can’t even vote yet?

37.  Yes, I’m going to the DMV twice in two weeks. That should earn me sainthood points.

38.  Just kidding. This is one of those bonus changes from covid — they only do things by appointment at the DMV now.

39.  No more cramming yourself into a waiting room with hordes of people, waiting for hours until they finally call your name. Sometimes it means waiting months for an appointment but still, no crowds. I’ll take it.

40.  Pretty soon we’ll have both kids driving and I just don’t know how I feel about it. That sounds like an old(ish) parent thing and that’s a lot to take in on a Friday night. Margaritas, anybody?

Join 3,962 other subscribers
Follow Riddle from the Middle on WordPress.com